Sadly, my first song in my shuffle list today is not HMHB. Do not judge me folks, it just happened! I blame my phone!

Anyways… Time for another gig review!

So, Sheffield Leadmill tonight, and being on summer hols gave me some flexibility… And that means another visit to Mam Tor!

Retracing my steps last time, and thanks to the bus schedule (and no train getting cancelled), I got to the top a little earlier today. The trig point is as always as usual: 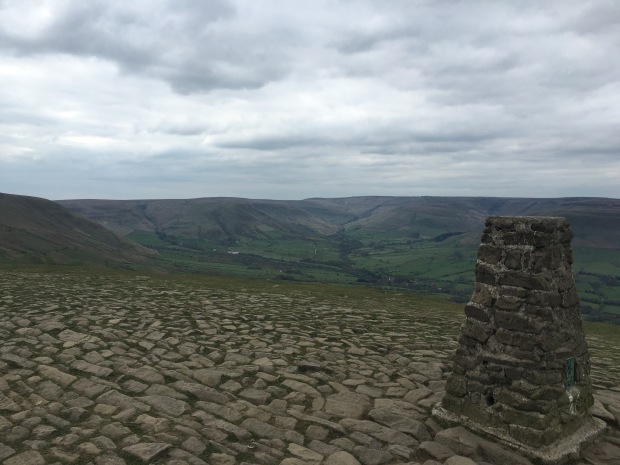 Getting there early allowed me to follow the ridge to Hollins Cross today, which should have promised stunning views. Sadly, it was hoying it doon the whole time, so no pictures taken.

I did, however, revisit the start of the Pennine Way, and couldn’t help but taking another picture – catching the brief break between showers!

And of course, another picture was granted while the train back passed Hope. Thankfully, this trip wasn’t as much beyond hope as my last (though the weather was, well, the weather). 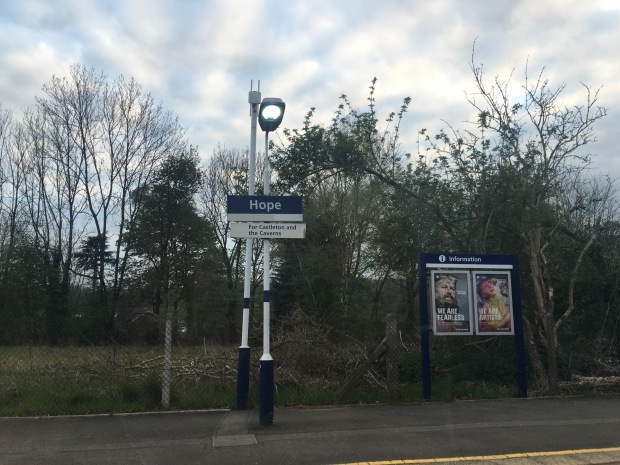 My host was the same as the last time, and we actually managed some conversation about walking & medicine this time. Turns out he’s going in his final year now and looks to go into family practice.

This morning, I took advantage of a brief glimpse of sun and went to the Botanical gardens (just steps away from my host) and hey, the blue bells are still on! That made me happy, so on I went for food, and stuff, before reuniting with the old gang. Elizabeth was there tonight, so were Celia and Andy. Got introduced to EXXO too… I’m still mulling over the “and the time’s uncontrollable” line mind you!

Glyn was still not there. Postman Tony wasn’t there, either, which was sad… But at least Ron was. No beer for the lad though, he got a bit too naughty last time after his drink!

So, we headed over to the Leadmill around and arrived just in time to see JD Meatyard on stage. Also got a coke this time after a run to the washroom – wouldn’t fancy weeing while at a gig, would I?

The lads came on closer to 9, and the first song was Old Age Killed My Teenage Bride. I’m so going to sing it at my own funeral XD

Then it was Bob Wilson, followed by DPAK. Both were mint, and got the crowd excited and all that. Bad Losers on Yahoo Chess was next, and I was finally able to get a live recording of it. It was another song that I started listening very early on, and courtesy to the slow development in technology where I grew up (in Beijing, China), I was able to sympathize. Wonder how many people my age in the West know about online chess and stuff.

Problem Chimp, FINALLY. After four gigs, of waiting, the lads finally played it live! What’s even better – I didn’t trip over a word for the first verse!

Joy in Leeuwalden was the next. There’s nothing better than a little bit of Korfball, is there?

So, I think that was when someone  shouted for Mimeshow. Nigel said something, but I didn’t hear what (gotta train up those Scouse ears, eh?). No wish granted though, and so we did Look Dad No Tunes. In fact, there was a tune, and it was very familiar to my ear. But not enough for me to sing along other than the “they gotta let them in” part. One of these days I’m gonna lock myself away for a month and do nothing but learn the words and references!

Harry Quinn was next… After four gigs of getting bewildered, I was finally recognizing this tune, and telling it apart from the other “unfamiliar” tunes. Yay me lol

Evening Sun came to save me. I still don’t know all the words, to be honest, but I can at least try for this one. “I shout all my obscenities from steeples, but please don’t label me a mad man”, and all that. Oh and the line “how do the road gritters get to work” line was finally warming up on me. Being a Canadian, I should have won that prize, but I still don’t know the answer!

Then it was another gem, Dean Friedman, after which Nigel commented on Dean Friedman’s comeback at him, and went on to play a bit of Bad Review. He didn’t get through it, though. So we did Petty Sessions and Paintball next. Again, quiet hall, but glad to hear everyone shouting the words!

Bane of Constance was next, followed by one of the lad’s newest inventions: Go Theresa Go. It sounded uncannily like the Communist Party’s “Go Harper Go” during the 2015 Canadian Federal Election, and it went like this:

“That’s political commentary for the night,” said Nigel, before picking up on The Best Things In Life. I think some football talk happened around this time. Can’t remember exactly when now.

Turned Up Clocked On and Dental Floss were next, without a proper break inbetween. During Dental Floss, the mosh pit got a bit too excited. I recognized the signs and went out to the side, where people were a lot quieter and the broadcasting was a lot louder.

Bad Wools really ignited the crowd, and, with that, the real build-up began. Lock Up Your Mountain Bike managed to clear the background noise for the next bit, then the all so familiar “my hands were stained with thistle milk” signalled the Descending of a Lark.

I must admit when I first heard this song, I thought it was “diesel milk”, and the protagonist is a factory worker. It was close enough but also not at all relatable. I now use it to tell myself that working at the bins may not be al that bad. I’d get to know some hard blokes & wouldn’t have to pretend to know what rhetorical means!

Then, I suppose to fulfill the “unusual request” presented at the double gigs (Worthing I think), the lads played Joy In Leeuwalden again. It was a bit unexpected, apparently, but the crowd quickly got back to it and sang along again. Much laughs and cheers by the end though. Loved it.

Chatteris came on, followed by VB – just the classics, you know? Funny, that, cuz I just recommended Chatteris in one of the other groups (they asked for fav songs for an imaginary dance, just so you know… I didn’t go slap it onto anyone’s faces), and wondered about VB. But considering that group asked specifically for PG13 stuff (not that I approve), I don’t have much say in that matter…

The Climax is always guaranteed with a string of classics, so Shite Day came next, with Nigel tripping over the “Is this your sanderling” line, and adding a few ridiculously vengeful lines after that. All good fun, with Joy Division Oven Gloves coming next. For sure, Elizabeth’s oven gloves rose in the air like a pair of basilisk eyes (ok bad analogy). The gig is never complete without them!

Vitas introduced Trumpton Riots, and we finished the main list with an extra gleeful Trad Are Tune… Wonder which village it was and which tune that sang while building it!

Didn’t wait long for encore this time, either. And straight away, we were fed with a warm serving of The Light At The End Of The Tunnel. I really need to sing it more these days and make it my motto!

The second encore was, like the traditions set by the past four gigs, a cover. No idea what it was though, but everyone appeared to know it so I think I’ll know soon. Finally, the lads finished with AOR… Thank you very much Nigel, it is as if you know you’d piss me off by finishing off with a song I’m not familiar with!

Didn’t stay for the post-gig pint for long, as I stayed quite far away and required a bus. Texted John to let them know I’m safe once I got back here, and now ready for bed.

Just kidding. I didn’t fly over the big pond and walk Mam Tor and go to Leadmill. I’m brooding on a bus from Montreal to Toronto (that’s the same distance as going from Newcastle to London), watching clips from the past few gigs! What a miserable old sod am I! I do hope this post is entertaining though… I did have plenty of fun writing it!

On that note, I do have some “news” and questions for the whole HMHB community… So I’ll ask here:

I’m working on a short story collection that talks about life in Northumberland, and I referenced our secret society a few times, including three songs/lines from the lads, and the name Postman Tony. My aim is to get published here in Canada, and somehow manage to sell it in the UK too. Would I need permission from the lads to use their lines, or even to mention them? Also, if you (Tony) could give me your permission, that’d be great… Please just don’t be baffled as I used the name for a farm worker…

Also, if someone can give me some publishing advice, that’d be highly appreciated!