At the very first stage of planning, I had no plan to go to the highlands, simply because everyone says it’s a “must go”. However, my determination was quickly shattered as I was told that Glenfinnan Viaduct was here. So on to the train I hop, heading to this tiny little escape land in the Northwest of the country.

And as the train soared through Lowland Scotland, I wondered if JK pictured the Hogwarts Express partly following this route, with rolling hills, lochs, and later, mountains flying past. 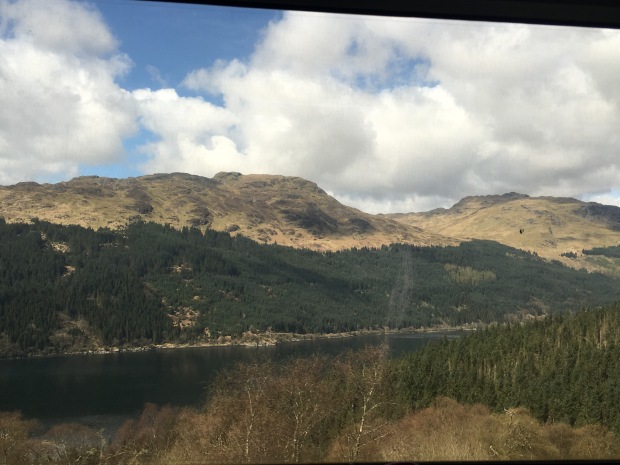 For a while, the mountains had their feet covered in forests and tops in bogs, which made me wonder if that’s because the tops are cold, or because of human activities. Personally, I prefer the latter explanation… 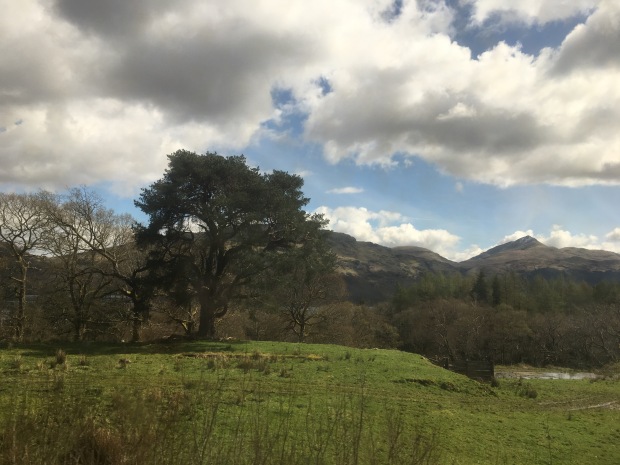 Somewhere in the Loch Lomond park, I spotted a wall… It could well be a farm hedge, of course, but with the tiny little shed standing there, I thought I saw Antonine Wall! 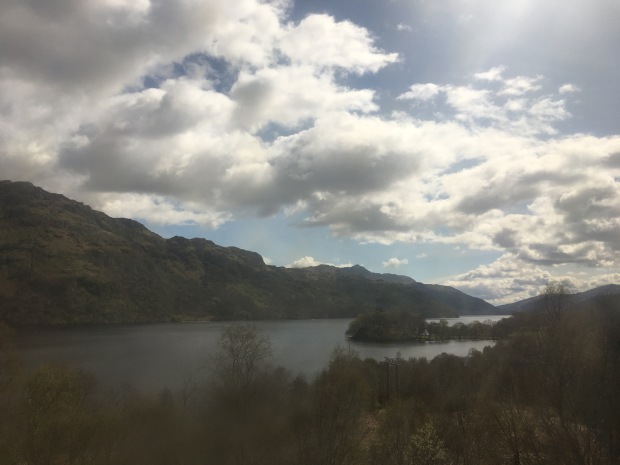 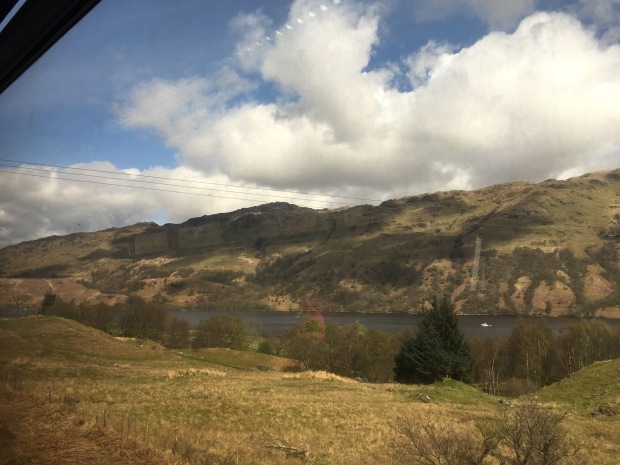 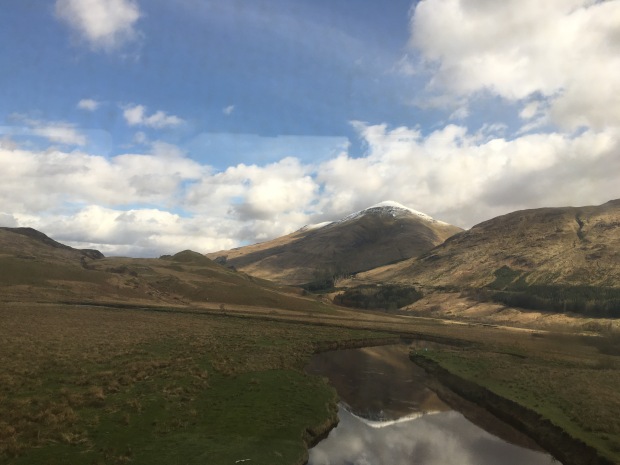 Soon enough, snow tops came into view… And the burns/rivers were cutting through the landscape more and more often as we approached the Highlands

Things also got wetter and wilder, with the mountains now consisting more bogs and less forests – possibly because of the latitude. Still, the landscape was stunning.

Then we arrived at Fort William. My host picked me up in town, and after doing some groceries, we went to his place in the village of Corpach. Looking south, Fort William is that town right across the Loch, and the snow-covered mountaintop on the left side of the picture is Ben Nevis, the tallest mountain in British Isles.

Things didn’t go as well as planned the next day, and I didn’t manage to get out early enough for Glenfinnan Viaduct. My initial idea was to walk there and then take the train back, but grateful for some extra research done on that day, I came up with the better plan… So on my third day in the highlands, I hopped onto a train to Glenfinnan, with a proper walk in mind… 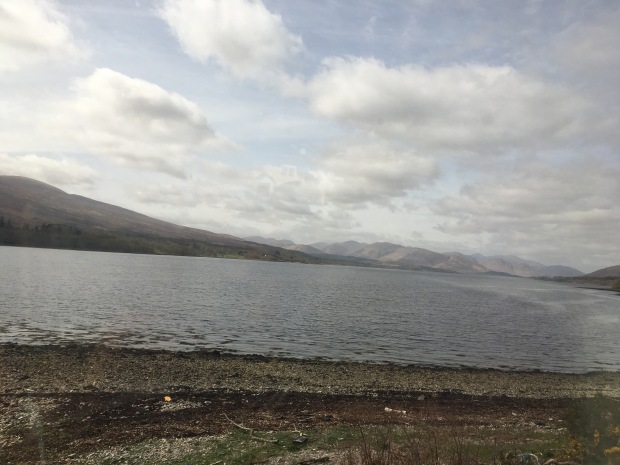 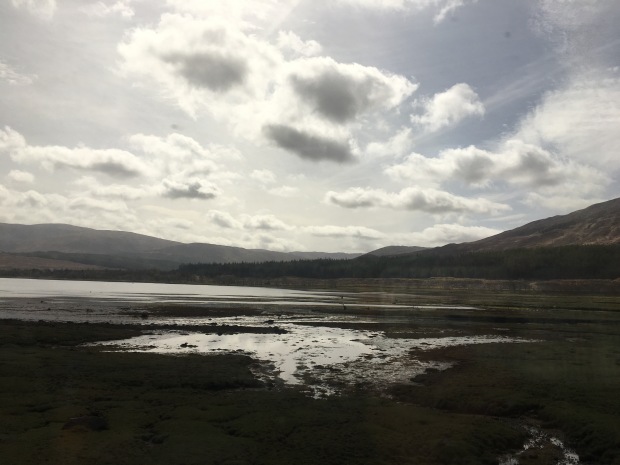 Loch Eil was extremely long, and I was thankful that I saved what could be a potentially boring walk to do something more interesting. That was when we went onto the Viaduct…

Off the train, and onto the station. I picked up a walking map from the museum, and decided to adjust my plan a little. Committing to it, I looked for the starting point of the Viaduct Walk, and found it with some help from the staff. The very first part was on wooden paths, gaining some fast height. Then I was on the gravel filled paths, still going up. I was again having doubts, but nothing as bad as Arthur’s King. 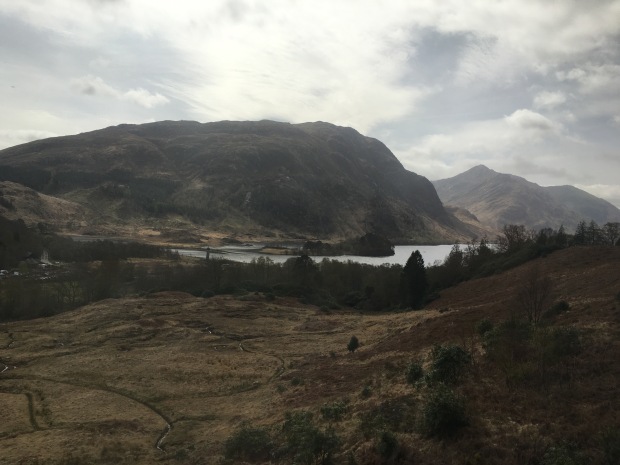 The path consisted lots of ups and downs – more difficult than Bloodybush Edge, but easier than Arthur’s Seat and, because there was no mud, Tintern. I needed some convincing to manage a few segments, and was scrambling a bit, but there was no need to cry XD

I saw the viaduct towards the end of this short walk, and, going underneath it, turned north as I started on the second part of my route.

The first part was easy enough. I had fairly good signal on my OS Map app and that made sure I knew where I was whenever I checked. Then, I realized that the northern half of this route was not loaded in the OS Map, so I had to check another app to see the paths. A car drove by me, and the driver asked if I needed any help with map reading. Smiling, I told him I was just checking to see what laid ahead.

(More from the walk)

Then it was time to turn into the Forestry Commission tracks. After Bloodybush, I developed an ambivalent attitude towards those tracks as they tend to be very easy to see/follow, but at the same time boring and feet-ruining. This track I followed seemed to be relatively new, so the middle part was still soft and grassy, which wasn’t too bad.

The forestry track was a long stretch, and I kept fearing I’d gone too far. Again, there was no need for it, as, an hour of wondering where I was later, I was at the edge of the forest, looking at the right “junction” to turn. It was all green and grassy, so even though I consider it a “slopey downhill”, it only took one “just do it” to get me down.

Not fancy doubling back, I wanted to take the road across the river to return. However, crossing the river proved to be a problem, and even though I saw a road leading towards the river on both sides, and the two roads sort of met each other, there was no bridge. There marked a bridge on the map about one kilometre away, so I thought that was probably more sensible…

Except, I was met with this. A waterfall, a pond, cutting through the road and no bridge/step stones. It felt like every time I go for a walk, there was something I’m just not prepared for, and today I was to learn how to navigate across water. 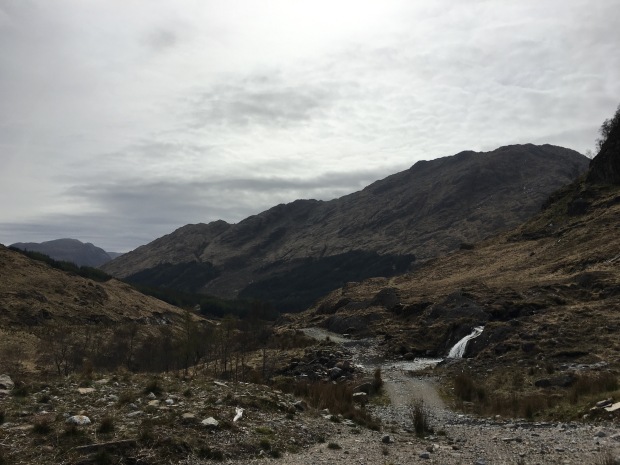 Taking in the environment carefully, I decided it safest to keep to the left side away from the waterfall (the picture was taken after I went across it, and therefore backwards). Balancing myself carefully on a big rock, I stepped forward, feeling a stable rock with my foot. The water was deeper than it seemed, but my boots were still quite good, and after the few hesitant yet quick steps, I was able to reach the other side with dry feet.

Then I met the driver again, in front of a cottage chopping wood. He told me that it was a sort of accommodation place for walkers, and tonight there was going to be a concert there. I went inside and took an instant liking at the place.

He told me that he added peat in the fire, though it’s really difficult to see…

After a conversation on BC, forestry, and the Capilleno (?) Bridge, I set off again, and took a faraway picture of the cottage. The rest of the walk was easy: on a road, beside a river. It was as simple as enjoying the views. 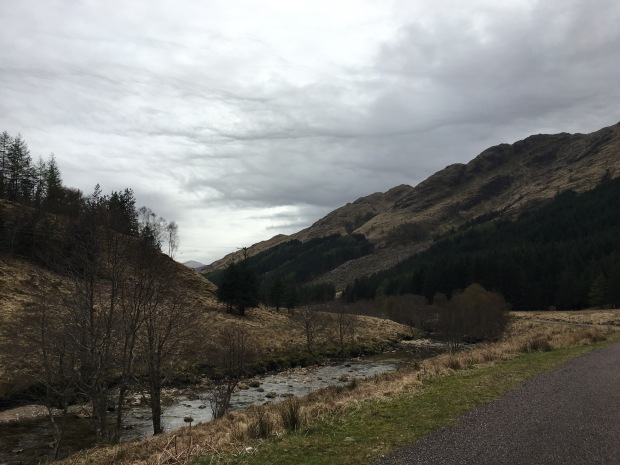 I made it to the train station about 20 to 5, just in time for the 5:54 train. And when I looked back at Ben Nevis in Corpach an hour later, the top had disappeared in cloud 😉 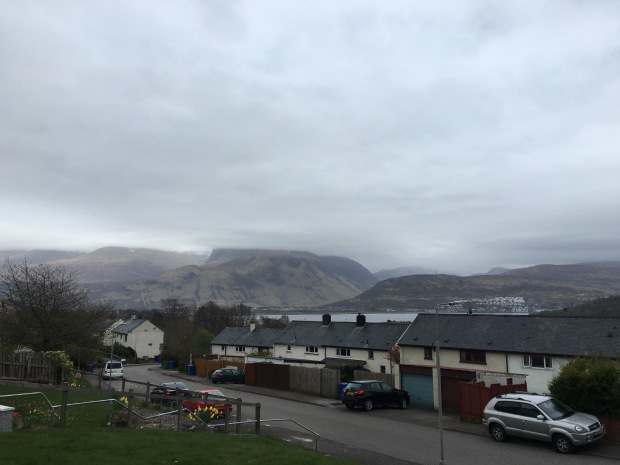